Music
Scott A. Landvatter
May 2009

·         History: Print music materials, including monographs, serials and music scores have existed within the library’s collections since the early 1900’s.  At some point during the late 1920’s, shellac 78 rpm discs began to be acquired, being supplanted by the vinyl 331/3 LP during the early 1950’s through the mid 1980’s.  Since 1984, digital audio CDs have gradually become the audio norm within the collection.  Continuous acquisition through both library purchases and gifts has built one of the most important music collections among American academic libraries.

·         Broad subject areas emphasized or de-emphasized:  Past collection development activities for print materials focused on music biography and historical musicology, with a notable strength created in medieval and Renaissance studies.  Virtually no material on world music or popular genres was obtained during this time.  The relatively large vinyl LP collection supported these earlier emphases in the print collection.  During the late 1980’s, the Music Department hired its first full-time ethnomusicologist.  Since then, enormous growth in the areas of world music and, by extension, certain domains of popular music, have been seen in both the print and audio portions of the music collection.  When Regenstein Library became home of the Chicago Jazz Archive in 1976, selection of circulating print materials supporting jazz studies began.  This selection, along with the purchase of circulating jazz and blues CDs, continues with increasing emphasis to the present time.

·         Description of Academic Program:  The Department of Music offers BA and Ph.D. degrees.  The Ph.D. program offers emphases in Music History and Theory, Ethnomusicology, and Composition.  Though the Department supports several performing ensembles, no degree in Performance is offered.  Research areas of particular strength include early music through 1600, opera, tonal and atonal theory, aesthetics and music cognition, ethnomusicological studies in American, European, African, Asian, and, most recently, Central, South American, and Caribbean music.  Strengths in the composition program include individual student work with highly-renowned composers and the analysis of contemporary music.

·         Audience/Purpose:  The music collection supports the study and research of faculty and students in the Department of Music.  It also supports cross-discipline studies from the areas of Literature, Art, Dance, Religion, Philosophy, and Anthropology.  As the audio recordings collection has grown in the areas of world and popular music, as well as in jazz and blues, the needs of the recreational user can be met, while the requirements of related studies in the Music Department can also satisfied.

·         Levels of Selection: Comprehensive, research, instructional support, basic information; for a description of these levels, see the general policy statement.

Library of Congress classification for Music includes M for music scores, ML for literature about music, and MT for the instruction and study of music.  It is important to be aware that music scores can be classified outside of M; for example ML96 - ML96.5 covers manuscript and facsimile scores.  MT170 - MT810 are scores of instrumental techniques and methods, and MT820 - MT893 covers scores for vocal techniques and methods.

·         Music Scores (M1 - M5000): The score collection within this LC range is perhaps 90% art music.  Within this 90%, collection is done on the comprehensive level for major composers active from the 11th century through the present.  For lesser-known composers who are nonetheless important or notably influential, collection is conducted on the research level.  Lesser-known composers who have written a few important works are collected on an instructional support level.  For the 10% of the score collection that includes popular music, folk and traditional music, and music from musicals, collection is done on the instructional support level.  The very few scores that are available for jazz are often transcriptions from recordings and are collected at the comprehensive level for major jazz composers.  This selection can only be done to the extent at which these scores are published and can be found.

·         Music Scores (ML96 - ML96.5):  Facsimile scores are collected at a research level when requested by graduate students or faculty.  Facsimiles are collected on an instructional support level for certain important compositions.  Manuscripts, in the form of microfilm or digitized images, are purchased largely as specific student or faculty requests.  Because they are required for research, collection can be considered to take place at a research level.

·         Music Scores (MT170 - MT810 & MT820 - MT893):  Since the Department of Music does not offer degrees in performance, pedagogy or music education, scores that are instructional or technique-oriented in nature or constitute a “method” for learning an instrument are collected only on a basic information level, if at all.  The one exception is important older instructional material or methods that are often studied for their historical value.  These are collected on a research level.

·         Literature on Music (ML1 - ML3922):  Within this LC range, material focusing on music history and criticism, biography, bibliography, aesthetics and philosophy are collected on the research level.  Literature on music therapy and music librarianship is collected on a basic information level.

·         Instruction and Study of Music (MT1 - MT893):  As indicated above for music scores classed in MT170-MT810 & MT820-MT893, these are collected on a basic information level, at highest.  Overall, however, there are heavily collected subclasses within the MT range.  These include books on music theory, composition and orchestration and musical analysis, all of which are collected on at least a research level.  Historical theory and composition treatises, and facsimiles or reprints thereof, are collected on a comprehensive level.

·         Type of materials included and excluded:  Among print materials, scores, monographs, collected sets, and periodicals are all collected.  More than half of the music periodicals also have partial or full online access; any online periodical material that becomes newly available is made accessible to the university community.  Among printed acquisitions, areas excluded are instrumental and vocal music for children, programs for festivals or concerts, books on the music trade as a business, and books focused on specific music-writing software.

·         Physical formats included & excluded:  Print and all media formats are collected.  Among media, the acquisition of audio CDs is very high, with the purchase of new DVDs of opera or live music performances being significantly lower.  CD-ROMs are purchased very rarely; most make their way into the collection as part of a print monograph.  Vinyl LPs and VHS video tapes are no longer purchased, being added to the collection only as gifts.  Whenever music journal material is made electronically available online, access is provided for the university community.  Subscriptions to electronic music indexes and abstract databases include RILM, RIPM, RISM, IIMP, and The Music Index.  A representative electronic music reference source is Oxford Music Online, which contains the Grove Music Dictionary, the Oxford Dictionary of Music, the Oxford Companion to Music, and the Encyclopedia of Popular Music.  The library also subscribes to five online audio services delivering art music as well as world and American traditional music.  These include Naxos, Classical Music Library, Database of Record American Music (DRAM), Smithsonian Global Sound and American Song.

·         Publication dates collected:  Newly released books, scores, CDs, and DVDs dominate present acquisition activity.  As funds permit, important older publications are obtained.  It is often in response to specialized faculty and student research needs that old and sometimes out-of-print items are sought.  Also, the arrival of a new faculty member may require purchase of previously released material that the library did not acquire.

·         Languages:  All languages are obtained, with an emphasis on English, German, Italian and French, and a lesser stress on Spanish.  It is important to note that the huge majority of academic-level music research is published in English, German, Italian, and French.  Thus it is that these languages dominate the music collection.  Important material in Slavic or Scandinavian languages is also purchased when it appears.  English translations are only acquired for very important foreign language publications and Western European language translations of works written in lesser-known languages may also be purchased.

·         Geographic Range:  Print materials and media are largely obtained from North American and Western European publishers.  Titles published in Latin America, Eastern Europe, and Scandinavia are purchased to a lesser degree, based on their importance to the collection.

·         Chronological Span:  The chronological subject range covers music of the ancient world to the present time.

The library’s Special Collections Research Center (SCRC) includes a number of important music manuscripts and early print editions.  These range from a 13th century Chanson de Geste to a proof copy of Mendelssohn’s Elijah, with alterations made in the composer’s own hand.  Undoubtedly, the most important music collection in SCRC is the Chopin Early Editions, which is accompanied by a website including over 460 fully scanned first and early edition scores, along with complete bibliographic information.  In the circulating collection, notable areas of strength include music biography, history of medieval and Renaissance music, music theory, and, more recently, world music.

The John Crerar Library holds significant print materials on acoustics and the science of musical pitch, rhythm, and timbre.  These works are an important source for the Music Department’s coursework in music theory, music cognition, and music aesthetics.  For students and faculty interested in music and recordings copyright law, the holdings of D’Angelo Law Library provide an indispensible resource.  Among the collections within Regenstein Library, those in Art, Literature, Religion, Philosophy, and Anthropology are of particular importance to music faculty and students.

The most valuable cooperative arrangement for music students and faculty is that with Northwestern University’s Music Library.  Since the University of Chicago Department of Music does not offer degree programs in performance, our score collection contains very few arrangements of original compositions and limited sets of performing parts not accompanied by a score.  Conversely, Northwestern’s significant performance programs require both arrangements and part sets, as well as pedagogical works and methods.  As mentioned previously, Regenstein’s score collection contains only those pedagogical scores and methods that are of historical interest.  Northwestern University’s Music Library also benefits from this cooperative relationship, especially through Regenstein’s very strong collection of advanced academic level monographs, which are fully serviceable in supporting high level research. 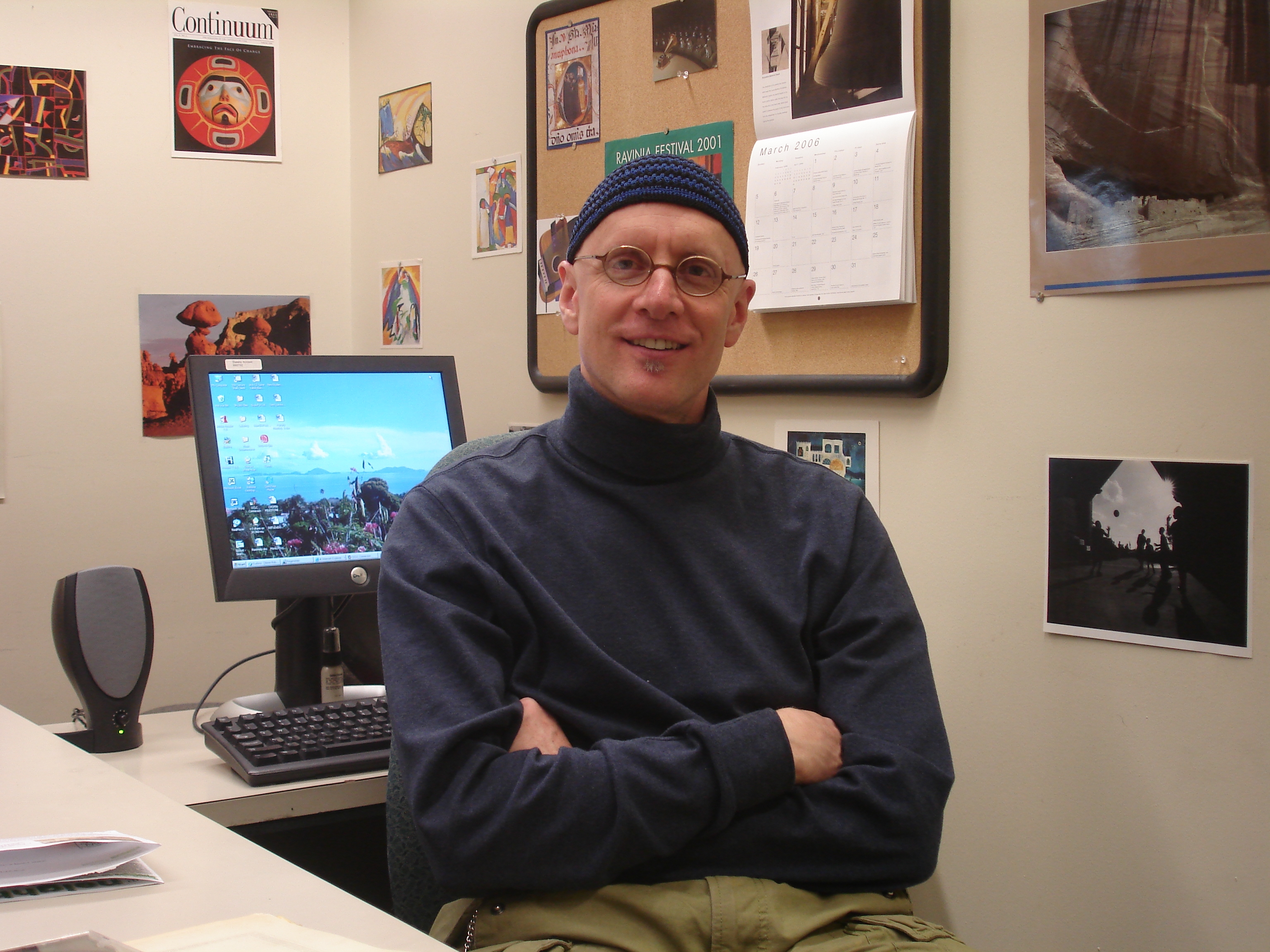