About the Postcard Collection of Colonial Korea

Currently available in the LUNA program of the Visual Resources Center. 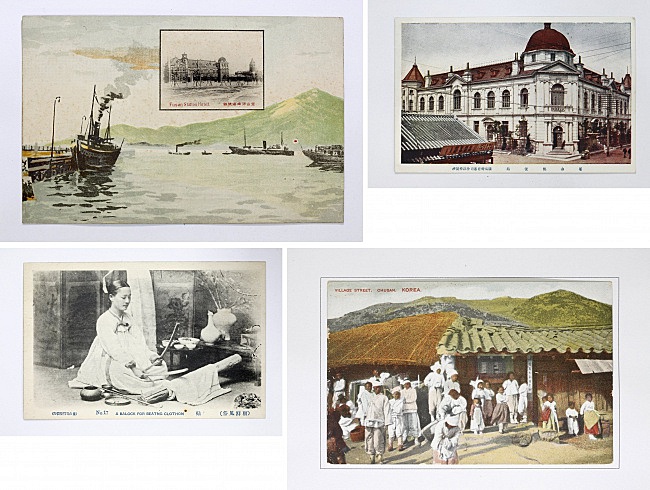 The Postcard Collection of Colonial Korea is now available online. This Collection includes 8,000 postcard images depicting the cultural, industrial, and technological status of Korea from the first half of the 20th century. The Collection is a valuable visual resource for Korean studies at the University and will be a significant primary source for research.

The Postcard Collection of Colonial Korea includes items created between 1900 and 1945 in Korea or abroad. It is organized into three sub-collections:

With the introduction of photography and the ease of printing in the Western world, the popularity of photo postcards developed quickly in the late 19th century. The emergence of imperialism as a global trend led to a rapid increase in cultural curiosity about colonies which was helped with the production of postcards containing colonial landscapes. As travel became a new consumer culture for the public, buying and selling photo postcards as souvenirs became commonplace, and collecting photo postcards emerged as a new hobby.

With the Japanese advancement in Korea, images of Korea and Koreans were mass produced for Japanese photo shops and souvenir shops in the form of photo albums and postcards. The photo postcards of Korea were made in sets of eight under the name Chosŏn Customs that were continually reproduced during the colonial period. These photo postcards can be broadly classified according to the nature of the photos, such as governance and administration postcards, customs postcards, tourist postcards, and promotional postcards. Each set depicts specific content such as customs, tourism, cities, architecture, people, and statistics.

The Collection is valuable for its visual images of the cultural, industrial and technological side of Korea during the first half of the 20th century. Also, the first entity to produce photo postcards of colonial Korea was Japan, so the image of Korea portrayed in these late-modern photo postcards is not entirely free from imperialist and colonialist views. Imperial Japan created a specific representation of Korea through selectively chosen images that were presented as a careful overall reflection of the late Chosŏn period.

Seven institutions in North America—University of Chicago, Columbia, Harvard, University of Michigan, Duke, University of Toronto, and UCLA—acquired a copy of the scanned images of the Collection from a South Korean publisher in 2010. The seven institutions then formed a working group and collaboratively worked on metadata development, creating Korean Romanization, verifying Chinese and Japanese characters and adding English keyword search terms for each of the 8,000 postcards.

The University of Chicago’s copy of the Collection is currently stored at the LUNA program in the Visual Resources Center.