An overview of resources for researching California law.

Like most court systems, California courts are organized into three tiers:

For more information about the California court system, visit the court website.

Official California court rules are no longer published in print. Current rules can be found on the court website:

Unofficial, annotated versions of the court rules are available in Westlaw and Lexis.

Use the Westlaw Key Numbers to find cases by topic: 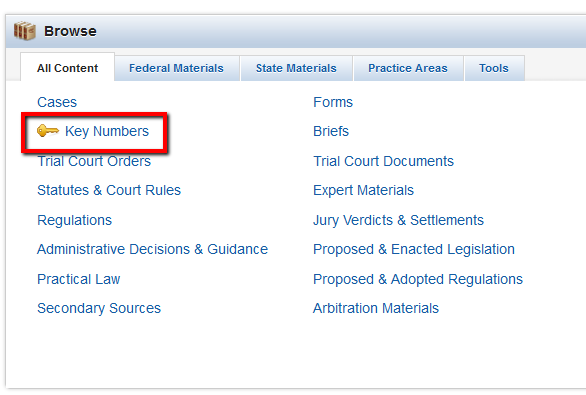 Digests are books that organize cases by topic. You can likely find them in your law firm or court library, or a local public law library. For more information about using digests to find California cases by topic, see this guide:

In general, only published opinions from the California Courts of Appeal can be cited as authority. Other types of opinions you may come across include:

Unpublished: Opinions the court chose not to publish. Unpublished opinions are available in Westlaw, Lexis, and on the court's website, even though they should not be cited as authority.

Partial publication: The court may certify only part of an opinion for publication. Unpublished portions should not be cited as authority.

Depublished: The California Supreme Court can decide to depublish an appellate court opinion at any time.

Limited exceptions to the rule against citing unpublished or depublished opinions are set forth in Rule 8.1115, in the California Rules of Court.

For more information about the publication of and citation to appellate opinions, see Rules 8.1100 - 8.1125 in the California Rules of Court.

You probably won't need to find or look up cases in print reporters. Case citations are based on these print reporters, however, so understanding the differences can be useful for interpreting citations. Citation rules usually specify which reporter you should cite to.