A guide to resources for Halloween from the University of Chicago Library.

There have been a number of strange happenings at the building at the corner of 103rd and Longwood Drive in Beverly, known as the Irish Castle.  According to Haunted Chicago " The source of the haunting is said to be a previous occupant from the time when the castle was the Chicago Female College.  According to the story a young girl became ill with a serious case of influenza and died in the early 1930s.  The legend says her name is Clara and she has never left the place" Located at 18th and Indiana is Glessner House in the former "Millionaire's Row" of 19th century Chicago.   Designed by the Architect Henry Richardson in 1886, the house was crafted in the Romanesque style, unusual for the area.   It was Richardson's last design of his career.  He died just three weeks after the house was completed at the age of 48.  By the 1960s the house had fallen into ruin but was saved by concerned architects.  Around this time, according to reports of the caretaker he often saw "something..in the shadows of the house and in the courtyard area.  He heard the sound of heavy footsteps walking through empty rooms and often those on tours of the house would complain of an "unsettling presence" .  There were reports of a "large shape of man" walking around who turned and vanished when witnesses approached.  The ghost is believed to be that of Henry Richardson. (Information from Haunted Chicago) Oakwood Cemetery is the closest cemetery to Hyde Park.  It covers 67th to 71st Street to the east of Cottage Grove.  Buried there are a number of famous historic figures including  Civil Rights activist Ida B. Wells, physicist Enrico Fermi and olympic runner Jesse Owens.  Chicago mayors Thompson, Washington, Woodworth and Sawyer are also all buried here.  In addition there is a towering burial monument to the six thousand Confederate soldiers, prisoners of war who died at Camp Douglas. Camp Douglas was located in what is now the Douglas neighborhood, across the street from the Old University of Chicago.

Located on the far south side at 111th and California, Mount Olivet cemetery is one of the oldest cemeteries in the city, established in 1855.  Catherine O'Leary, the owner of the cow who allegedly started Great Chicago Fire is buried there. 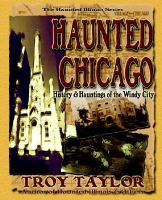 Chicago Haunts:  Ghostlore of the Windy City by Ursula Bielski